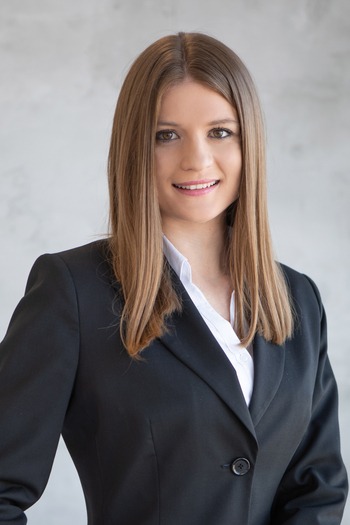 Nina Raškov is an Attorney at Law at Zunic Law Firm Novi Sad.

Nina joined the firm in 2017 after she obtained her Bachelor’s Degree at the Faculty of Law University of Novi Sad graduating among 1% top of the class. During her studies, Nina received various prestigious awards for her academic success several years in a row. She had been awarded a Special University Award for Academic Excellence. Nina was also among the best students in Serbia, based on which she became a scholar of the Fund for Young Talents of the Republic of Serbia and was awarded the “Gifted Students’ Fund” of the University of Novi Sad scholarship.

She also completed her LL.M. studies in International Commercial Law, International Protection of Human Rights, Commercial Law of the European Union and International Affairs at Faculty of Law at the University of Novi Sad. Her master thesis entitled “Compensation for the damage caused by the violation of the right to a trial within a reasonable time” was awarded the highest grade.

Nina was a member of a team representing her faculty at the most prestigious international competition in international law, Willem C. Vis International Commercial Arbitration Moot in Vienna. Prior to that, she also competed in regional rounds at the Sofia Vis Pre-Moot 2017 at the Bulgarian Chamber of Commerce and Industry (BCCI) and the Belgrade Open Pre-Moot Competition 2017, achieving great success.

Nina speaks Serbian (native) and is fully fluent in English. Nina also has knowledge of Spanish and German.