HOW MUCH DOES DIVORCE COST IN SERBIA – IS THE PRICE OF A DIVORCE HIGHER THAN THE PRICE OF LIVING IN A DYSFUNCTIONAL UNION? 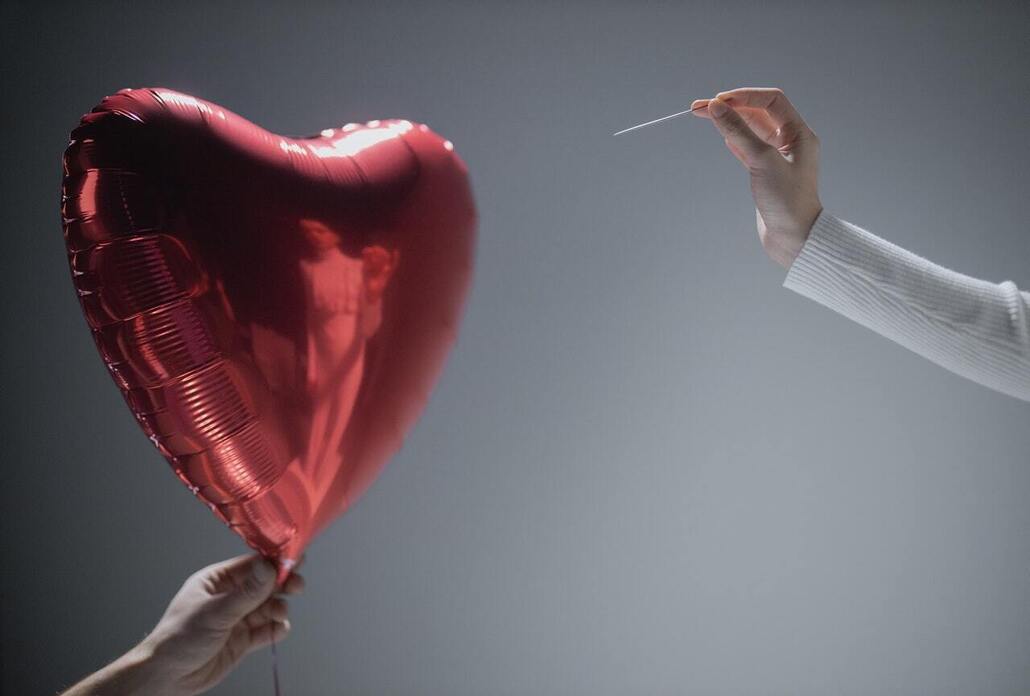 In this blog, we’re answering one of the most common questions that our attorneys specializing in family law receive: How much does divorce in Serbia cost and how to prevent it from affecting the spouses’ rights after the divorce?

It is quite expected that we want to know an outcome for every decision that we make. In the decision-making process, one of the main factors we consider is certainly the cost of the decision. When it comes to the decision on divorce, the situation is no different.

Fear of the divorce process is often the reason for prolonging the decision on the official dissolution of the marital union that is no longer functional. However, regarding the course of that procedure, the main question is, in fact, how much does the divorce cost? The price of a divorce is often more important than the deadline within which it can take place, and can even affect the outcome of divorce negotiations. Trying to reduce the costs related to divorce, spouses often change their attitudes and conditions under which they agree to end the marital union.

However, is it justified that the price of divorce dictates the decision on the conditions of divorce? We are of opinion that it is not. We believe that there are several ways in which the costs of a divorce can be reduced by reacting sooner or later.

Which Type Of Divorce Procedure Is Cheaper?

The price of a divorce mainly depends on the type of divorce procedure that the spouses choose.

If you had interest in this topic earlier, then you have probably heard that there are two ways to divorce. The first one is uncontested divorce, and the other one is contested divorce. We already wrote a complete guide about divorce in general. We also covered frequently asked questions about divorce in one of our blogs. That is why in this one, we cover a more specific question – what are the actual costs of a divorce in Serbia? 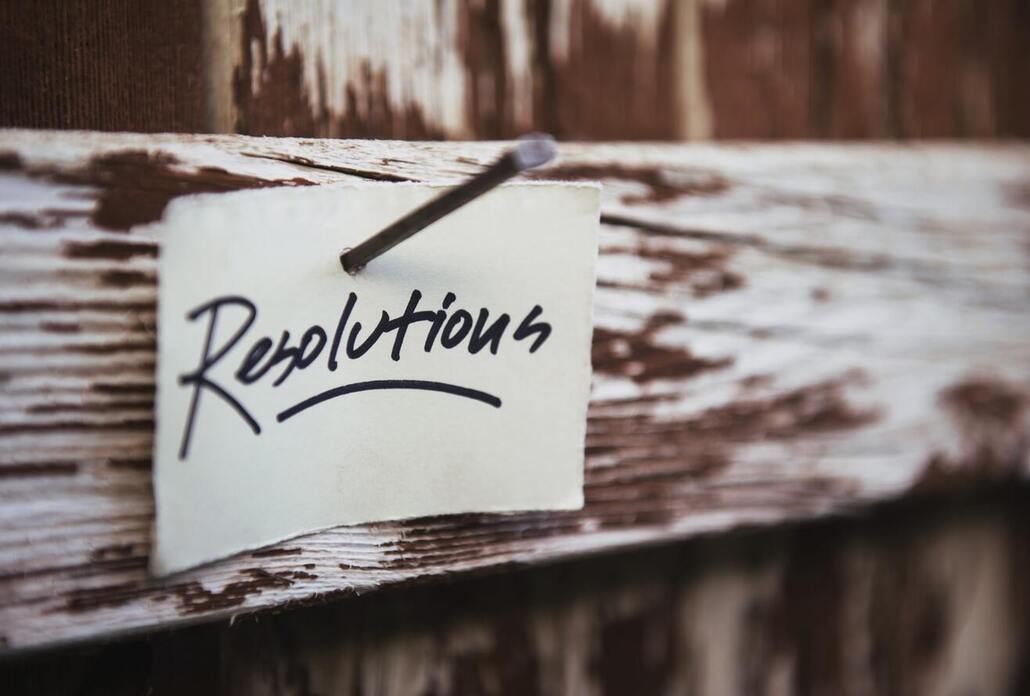 In the case of uncontested divorce, the spouses sign the Divorce Agreement, which should also cover the question of parental rights and property division, if there is any. An expert with practical experience can help you by making an Agreement and a Proposal of a court decision on divorce for you, as well as point out possible difficulties in achieving the defined conditions of the Agreement and suggest the best solution.

Uncontested divorce gives the spouses the oportunity to let the attorney represent them completely, which means they don’t have to show up personally at the Acting Court. This could save a lot of time for the parties, as well as money, especially if it is a divorce with a foreign citizen or spouse who does not live in the Republic of Serbia.

A significant reduction of divorce costs in the case of an uncontested divorce is also reflected in the fact that the procedure usually ends at a single court hearing.

However, one of the things that differ the lawsuit from the agreement is that when the court divorces, it will not decide on the division of marital property within the same procedure.

Therefore, due to the uncertainty of the court’s decision on the other two elements of divorce – the exercise of parental rights and division of property, as well as the impossibility of predicting the duration of evidence hearing, contested divorce lasts much longer than the uncontested divorce.

In the procedure of a contested divorce, it is also uncertain how many hearings will be held and how many written actions of an attorney will be needed.

Types Of Costs In The Divorce Procedure

The factors involved in determining the price of the above-mentioned divorce proceedings are the same.

However, considering the difference in duration of the uncontested and contested divorce, it is logical that the cost for them must differ. 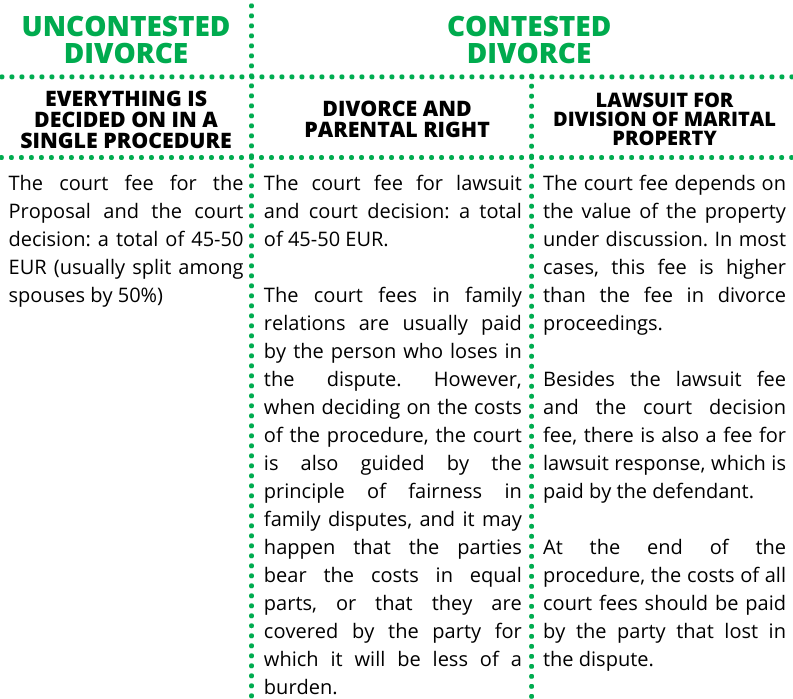 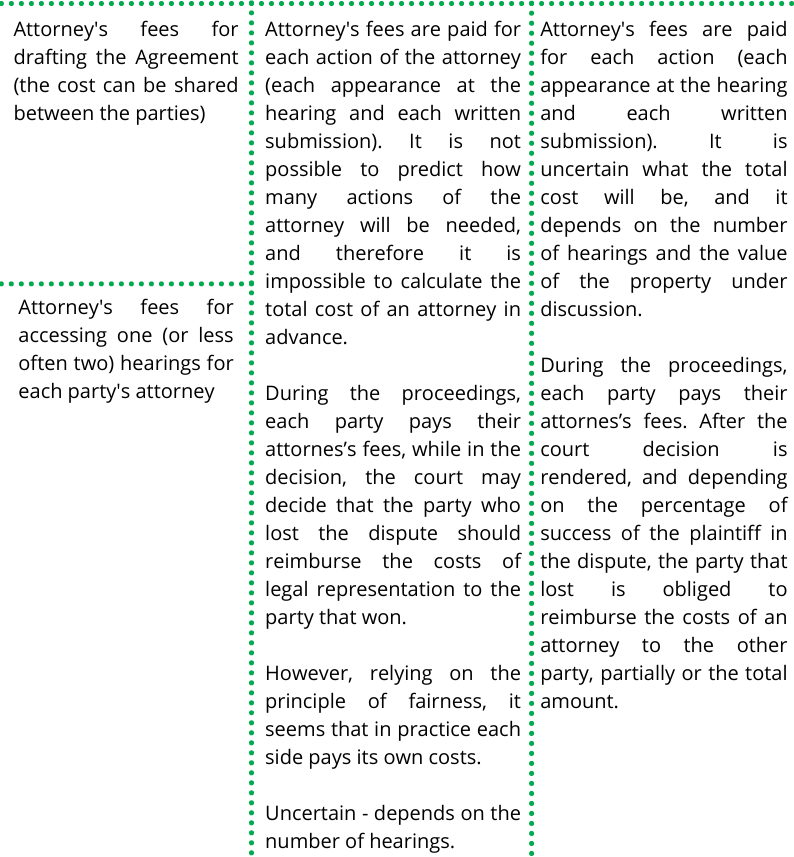 Unlike the agreement, in the contested divorce procedure, predicting the costs of a lawyer, and often the cost of the court, is almost impossible.

When it comes to court fees, they have the same range for a divorce lawsuit with a request to exercise parental rights. However, the court fees for a lawsuit for the division of marital property are determined by the value of the dispute. Attorney’s fees in lawsuit proceedings are determined the same way.

Having in mind that the subject of the dispute in the case of property division is usually the real estate or other valuable property, it can be concluded that the costs for resolving the division of marital property in court by the lawsuit are high.

However, what increases the costs of court proceedings by the lawsuit is the number of hearings, which are held by the court in order to present all the evidence and make the decision. In reality, these proceedings last for years, even when they are parental proceedings that are considered urgent. The parties usually pay the costs of their attorneys, but the court is free to assess the fairness of covering these costs.

On the other hand, when it comes to the division of marital property by the lawsuit, there are often cases in practice that have been conducted, believe it or not, for decades. Although the costs of court proceedings are paid by the party who loses the dispute, and also in the percentage in which it loses, the fact is that this is preceded by many years of emotional and economic exhaustion of the parties.

How Can The High Costs Of Divorce Be Prevented?

So, it is clear that depending on a court procedure, the costs of divorce differ. However, when there is a lack of agreement between the spouses, the type of court procedure, unfortunately, is not a matter of their choice. After all, if the spouses can not agree on all the points of the divorce agreement, the price of the court proceeding should not be a factor that will force them to agree to something they essentially disagree with.

Therefore, it is a good thing if any disagreement regarding divorce can be prevented in some other way. In Serbian law, this is definitely possible when it comes to the matter of the marital property division.

Prenuptial Agreement – Prevention Is The Key 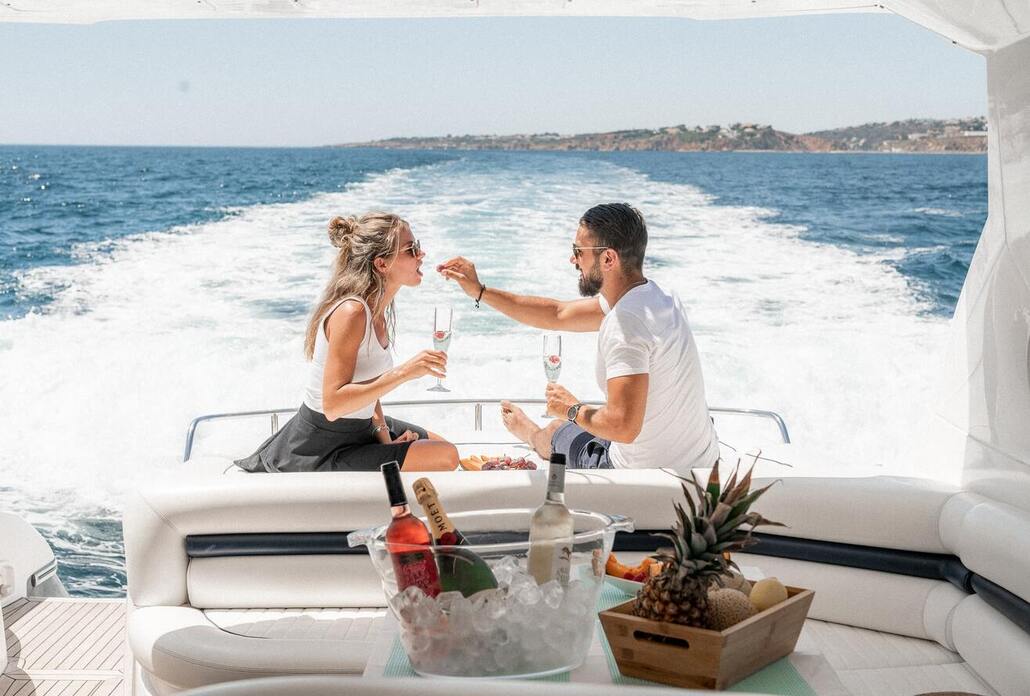 As we wrote earlier, „the person you marry and the person you divorce are not the same“, and therefore, it is always a good idea to think about potential problems in advance and prevent them.

The longest, most expensive, and most exhausting divorces are those in which the spouses can not achieve an agreement on the division of the marital property. It is the same with court proceedings for the division of marital property, which will finally end the union in every way, as well as negotiations in the case of a contested divorce. Therefore, the property division should be questioned while the spouses are still in good relations, i.e. when they are capable of steady and rational evaluation of their actual contribution to the marriage.

A spouse’s contribution to the marriage directly or indirectly affects the increase of the mutual marital property, so by concluding an agreement that considers their contributions, spouses can in advance determine how will their mutual property be divided in case of bad relations and finally, a divorce.

Although the marriage agreement implies only to the future division of marital property, it definitely is an important step towards lowering the costs of eventual divorce, considering that these proceedings by a lawsuit may last for decades and indicate significant costs.

Therefore, by concluding a marriage or prenuptial agreement, the spouses achieve consensus about what exactly will be considered marital property and how it will be divided in case of eventual divorce one day. That way, they exclude the possibility of any further negotiations and avoid the costs that would normally occur during the divorce procedure.

So, the marriage agreement does not imply that the spouses wish to divorce one day. On the contrary, this kind of agreement represents a rational approach to planning a family and personal life, prevents conflicts about property division, and gives a good starting point for future investments for both of the spouses. And, most importantly, if both of the spouses agree, the provisions of the agreement can be changed and adjusted. 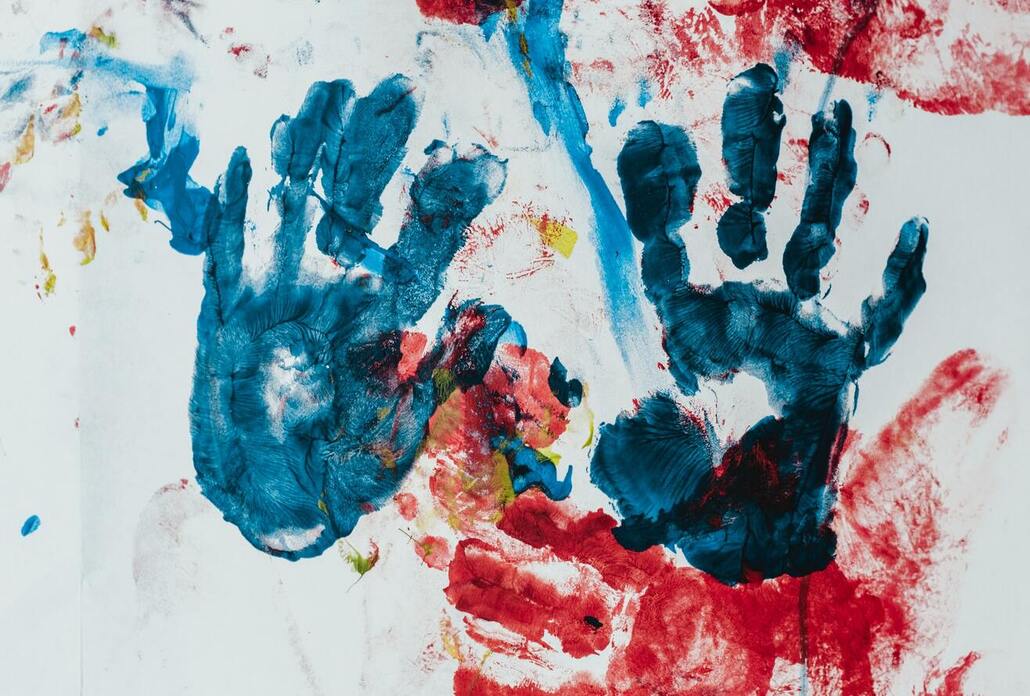 Neither marriage nor prenuptial agreement can regulate the question of exercising parental rights. It is always up to the court to regulate this matter, considering child’s best interest.

Trying to ease the child’s stress, and also following the recommendations of the court and Center for Social Work, the spouses achieve an agreement regarding parental rights much easier, while the matter of marital property division is still the biggest obstacle while getting a divorce.

When it comes to the reduction of divorce costs, we may conclude that the cheapest divorce is a contested divorce, i.e. the one that doesn’t include negotiations and disputes on mutual property and property division. Therefore, since often at the time of divorce there is no possibility of the spouses agreeing on all the conditions of separation, a good prenuptial agreement can save the spouses from decades of lawsuits on the division of marital property.

A faster and cheaper way to get married = more expensive divorce

On the other hand, the cost of a divorce should not cause any of the spouses to agree to an offer that they consider unfair to themselves. That way, some of them may lose their share in a property that rightfully belongs to them. Therefore:

Could Alternative Divorce Procedures Reduce The Cost Of The Divorce?

Divorce procedures that were presented, costs, as well as other mentioned institutes that may affect the cost of the divorce, can be applied to most of the legal systems nowadays. However, in some countries, there are some alternative divorce procedures.

Mediation As a Method Of Overcoming Problems

Mediation is one of the alternative divorce procedures that could reduce the costs of a divorce, and it is available in almost all legal systems.

Mediation is led by an expert who aims to bring the spouses to a common and for both parties most favorable, compromise solution. The advantage of mediation is that the professional approach of a mediator, as well as his experience, make this procedure a “peaceful way of resolving the disputed relationship”.

With the guidance and minimal intervention of a mediator, the parties are led to overcome the conflict that prevents them from communicating and finally, together, reach an agreement on the disputed issues.

Even though there is a certain cost of the mediation, if it is successful, that cost is multiple times smaller than the court procedure.

Another alternative form of divorce procedures is online divorce, which we already wrote about in one of our previous blogs. This form of divorce provides various types of proceedings, and in addition to many other advantages, it also aims to reduce the real costs for the spouses. Although this type of procedure is not dominant in the world, we hope that it will become so soon and that it will be available in Serbia as well.

Alimony in Serbia – Your Ultimate Guide Scroll to top